We’ve made it through the first five weeks of our new school year and it’s been slow, but full.
The first day of every new school year never goes as planned and this year was no exception.

Seriously! In all the past 8 years of homeschooling I have never struggled so much at the beginning of the year.
Maybe it’s because we didn’t have  the usual  “snowball start,” as there were a few other people we studied to wrap up our Black History unit study from 4th grade.
I thought that it would have been perfect to save George Washington Carver for when we would have our family play with peanuts tournament, Martin Luther King Jr. for week of the city MLK Unity Parade, and Zora Neale Hurston for the week of the annual Zora festival in nearby Eatonville.
But, maybe it was a little too much too soon.
We survived. We made it through. Not as enthusiastically as I would prefer. But we made it. And that’s cause for celebration. 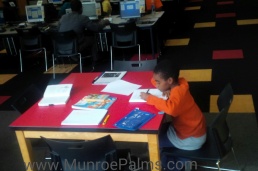 KC set up workstations for himself, working his way through each task around the table

We celebrated our newly renovated local library reopening by packing up and camping out there for the whole day. I think it was a great experience because it forced the boys to rediscover different areas of the library since everything was restructured. We really liked the new compact shelving system. KC & KJ were disappointed the children’s and juvenile section didn’t get the upgraded shelving system, but I’m thankful the Librarians chose to avoid the possibility of any children “accidentally” squashing another child in-between shelves.

However,  I would definitely say that the ultimate highlight of this whole month was our unexpected field trip to FunSpot. We heard about the opportunity for free unlimited-rides armbands if you made it there for the ground breaking ceremony for the all-new GatorSpot attraction.
It was too HUGE to miss. 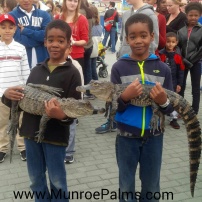 When the Gator handler realized they were twins he called for the other handler to bring over his gator because “twin boys need twin gators.”